The great Gaels of Ireland

When you have a great idea for a medical device how do you start to make the highly accurate parts required, especially if you are not a time-served machinist? Raphael ‘Ray' Blowick likes exactly that sort of challenge, and at the same time loves a storm, which is just as well. His smartly refurbished office and workshop sits atop the rock-strewn seaward slopes overlooking the Bay of Galway, Ireland, which is where the North Atlantic delivers some of its best, unhindered for 3000 miles. “We have some great storms here,” he laughs.

But even on the worst of days, inside the clean white walls of his start-up manufacturing company, all is quiet. The only sound is the cogitation of a man grappling with intractable issues of engineering and miniaturisation. That and the occasional high-pitched rasp of a Schaublin 48V CNC mill as it scythes through billets of aluminium and stainless steel - a machine that with Schaublin engineers' support Blowick taught himself to program and run.

There was a time in the dark ages of manufacturing technology when only fools and rich men would venture into the grimy world of production without a lifetime of experience behind them. But things have changed (at least, the technology has) and workshops like Clada's look a lot different than they once might have.

Ray Blowick, not being a production engineer, faced a steep learning curve when it came to machining. “I've always liked designing parts in Solid Works,” he says, “The problem for me has been turning those designs into physical parts.”

Starting with the premise that for the medical parts he intends to make, accuracy and process consistency are more important than complexity, Blowick took advice and invested in a small but capable Schaublin 48V mill fitted with a Renishaw OMP40 touch probe. He then took the bold decision to go further, purchasing GibbsCAM®, to turn his 3D designs into machining programs, Renishaw's Productivity+ probing software, to automate the programming of probe routines, and Renishaw's CNC reporter, an SPC package used to analyse and control the production process.

“Frank Boston from Schaublin Machine Tools supplied the machine, together with the probe system from Renishaw. He introduced me to Guy Brown from GSPS (www.gspsltd.co.uk), to set up the purchased software packages, configured for the Schaublin 48V.

Guy Brown installed Renishaw's Productivity+™ plug-in for GibbsCAM to integrate the generation of probing cycles with the creation of metal cutting tool paths within the Virtual Gibbs package. A complete metal cutting process can be defined and simulated prior to machine prove-out. Simulation provides graphical identification of the work piece and shows any potential fixture collision with cutting tools. Productivity+ seamlessly adds the probe moves into the simulation, so that the whole process is developed off-line. The net result for Ray Blowick is short, reliable prove out times.

“The touch probe measures the part during the production cycle, the great thing about it being the way the Productivity+ routine updates the tool offset. I know I can get a precision part every time, with the system automatically controlling itself. The measured data is also recorded by CNC Reporter, providing feedback to adjust the process and keep it within control limits. That's the kind of confidence I need to put some of these new ideas into production.”

“Guy and Frank helped me make a calibration part incorporating most of the features I'd be likely to machine. I know exactly what I have to do and the tools are all set up in the library, so I use it and don't need to mess around with it or change it. The probing moves are in there to control the process but also to verify the finished parts - if there is any variation that can be fed back to the CNC control. I can also get a print out for the QA people or for my own records.” 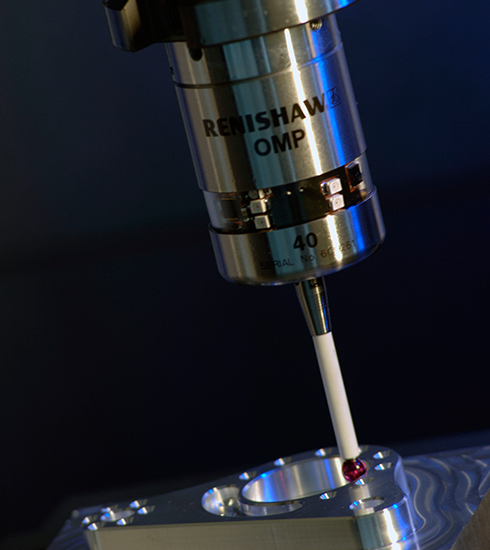 It all started with a good idea 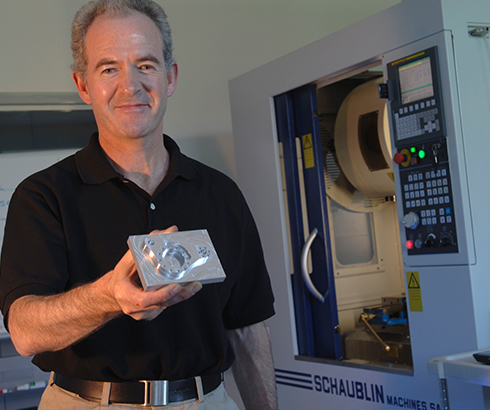 “This time last year an individual – a surgeon - came to me with a very clever idea for a new cosmetic surgery device but needed someone to develop it. I knew straight away that the only way I could do it would be to invest in the right equipment. I also knew that if I didn't show willing he would say goodbye and go to someone else. So, it was one of those decision times when you either move up, you stay put or you get out. I started Clada Medical a few months later.”Blowick has spent most

of his professional life working in the medical device design industry; one that's ubiquitous in Ireland, a country seen by many multi-nationals as an attractive and relatively low-cost portal into EU markets. However, when he started Clada he had little experience of hands-on manufacturing, but that didn't stop him from buying what he needed to see the job through from R&D to eventual production.

“The development phase is interesting and intellectually challenging,” he says, “but not particularly lucrative. What I am after eventually is the contract to manufacture, which I believe will be very lucrative.”

Údarás, the regional authority charged with upholding Gaelic language and culture and promoting business in the Gaeltacht area can justifiably share some of Blowick's pride in what he has achieved so far.

“Thanks to their help we've been able to invest in electro polishing, micro laser capability, moulding, four axis machining and precision turning,” he says. “We can do UV attach, glue bonding and everything else we're likely to need, except extrusions. I can take a new concept from Solid Works all the way through to the finished device.”

Údarás helped him to renovate the Clada building, “This place could not resemble a typical toolmaker,” says Blowick. “The medical industry has very high standards, so they expect you to have the best equipment and a clean, modern environment.”

Údarás will eventually provide grants towards hiring employees, all of which gives companies in the land of Yeats and James Joyce a fighting chance in a lucrative but very competitive global industry. For entrepreneurs and storm enthusiasts like Blowick, there are few places like it in Europe. But then, if you have the right technology and support, it doesn't really matter if you are in County Clare or the Côte d'Azur. It all comes down to your taste in weather.